Much to our amazement, our runner beans – planted just last week – have grown, well gosh! They’re even starting to twist themselves around the poles, which is great. 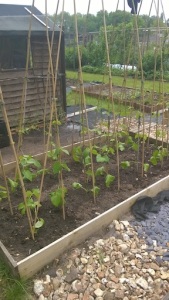 And the asparagus plant we’re leaving until next year is going to seed now, which is what is supposed to happen so that’s astonishing too. It’s a lot taller than I thought it would be though. Mind you, I still managed to harvest two asparagus tips, so we’ll have those as a starter tonight.

Nothing much happening in our spinach bed, however, although we’re now thinking of getting rid of half of it (as there are only two of us and there’s a limit to how much spinach two people can eat!) and planting the other half elsewhere. That way, we can use that whole bed for Brussels sprouts – which of course one can never – ever – have too many of …

In Flower News, the geum is now in bloom and is far bigger than the geums we have at home (which are Mrs. Bradshaw and Tangerine Dream, I think) – if only I could remember what type the allotment geum is, I would definitely get it for the geum corner at home. In the meantime, I have cut it for the house as it’s just so beautiful.

And the Sweet Williams are getting ready to strut their stuff as well, hurrah. Interesting, the astilbe also looks like it might do something soon, but I thought it was supposed to be an autumn plant. Shows what I know, eh – absolutely nothing!

We’re also carrying on washing the stones our kind allotment neighbours are leaving us (for which thank you!) and putting them across our marked out paths when they’re clean. It’ll take a while, but it’s looking good.

Have a great bank holiday weekend, all!

Yesterday, we bought 5 yellow raspberries (All Gold), and K planted them on the allotment this morning. 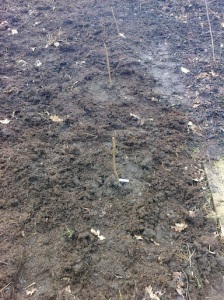 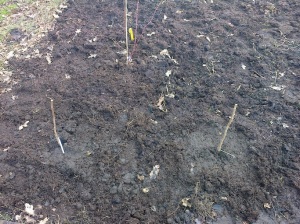 The rhubarb is also coming along nicely, and we managed to harvest a very small crop of the world’s tiniest beetroot and some winter lettuce.

As we’re keen to have an area for sitting in front of the shed, plus another raised bed there, we have marked the paths around the bed so we know what we’re doing a bit more. I think we’ll lay slates on the paths in the end as they’ll be lighter to transport than gravel, but we’ll have to see. 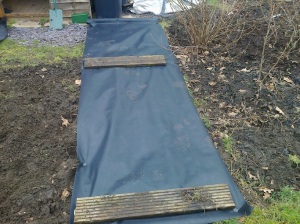 We’re thinking of putting wild flowers in that new bed, but no final decision as yet. I’d rather like a block of solid colour as it can look amazing, but we’ll have to see. In the meantime, the narcissi are doing well and look like they might burst into flower any moment now, hurrah! 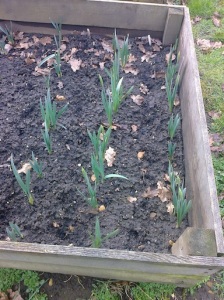 Sadly, however, the squirrels (wicked squirrels!) have found my lovely tulip bed and dug out the middle of it, sob! Thankfully they’ve left some around the edges, so there’s still hope as we can now see the tips of them. As a result and to discourage further digging, we’ve netted the bed. Next year, we’ll do that when we plant the tulips!

Have a great Sunday!