Popped down to the allotment after church this morning, and I planted up some cleome, coreopsis and gaura for the cutting garden:

That means I’ve got about 2 or 3 more rows left empty in that bed – which is in front of the shed – so am planning to put more cutting flowers there later on. Yesterday, our show chrysanthemums (gosh!) turned up, so it might well be them. I can never resist a big, blowsy, sock-it-to-em flower.

Meanwhile, K dug out the daffodils to give the potatoes more of a chance to spread out. We washed the best of the bulbs and put them in a bucket to dry off

After that, I’ll store them in the shed ready for planting for next year. I put the ones that didn’t survive on the compost heap. Talking of which, we now have not one but two compost bins at the allotment which we plan to use instead of the fenced off compost area. We think this will be easier to contain and sort out. K had planned to dismantle the fencing today, but we need a different kind of screwdriver, so will have to do this later in the week.

Meanwhile, we have a harvest – of sorts! Whilst digging out the daffodils, K disturbed a very early potato – which we cut in half and shared at lunch today – and added two beetroots and a good handful of lettuce to the collection. We’ve also had the beetroot leaves with lunch and they were delicious – tastier than spinach certainly, and such a pretty colour too with that red stripe to them. We’ll use the actual beetroot and lettuce later in the week, but I have to say the smell of the freshly-cut lettuce is simply amazing! I never really knew lettuce has a smell, but actually it does. 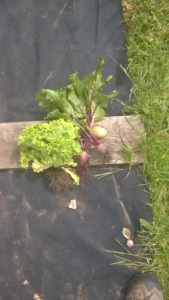 Have a great bank holiday.