Goodness me but the verbascum is the best it’s ever been, with more flowers to come.

The carnations are also in bloom, and I’ve planted a few more in the middle of the patch, where it’s getting bare.

Our sunflower seeds are growing very well, and I really must thin them out in the very near future or it’s going to be chaos in there!

I also have a few rudbeckia plug plants over from planting them at home yesterday, so I’ve added them to the perennial bed: 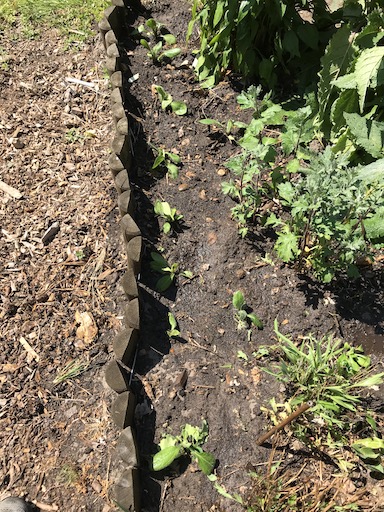 Meanwhile the asparagus is becoming a forest, LOL! I’ve harvested these for today but I think that’ll be the end of the season now.

We have also planted the Brussels sprouts which ended up filling one and a half beds. The photo below is taken before we put the netting on but rest assured we did rescue the trowel before putting the netting in place!

The peas are growing well, and K has now put in some stakes they can grow up. 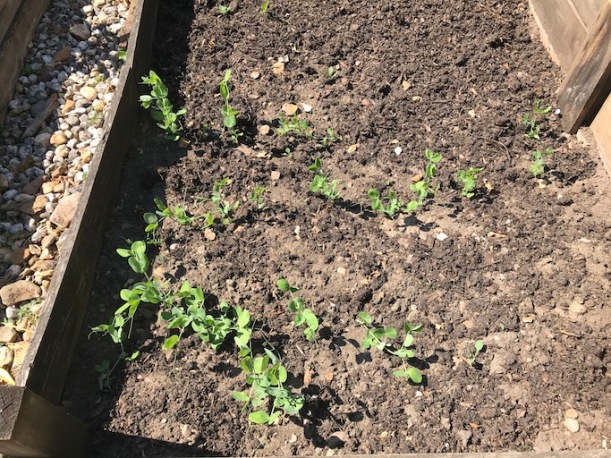 We are amazed at the amount of currants on the current bushes – they’re already so thick with fruit that the branches are weighed down! We’d best buy more netting to sort them out before the birds get there first … 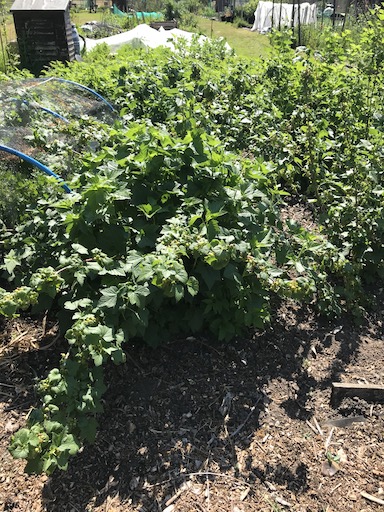 I have to say that the soil was also the driest I’ve ever known it so we did as much watering as possible while there. Here is the harvest of asparagus, verbascum and carnations:

And here are the vases at home:

Much to my delight, the first of the carnations are in bloom at the allotment today – I’ll definitely be bringing some more up to plant alongside them – I do so love that spicy scent of cloves they have.

We’ve also now dug up the daffodil bulbs for storing for next year – there seem to be loads of them too. Much more than before – I will have to bring up yet another big pot to put them in! We’ll probably plant some of the Brussels sprouts plants in the bed that is now spare, but will have to see how things go.

I also planted the rest of our gladioli bulbs so there is now a whole bed of them. The asparagus is also doing well and there was plenty for today’s lunch, hurrah:

Here is today’s harvest of verbascums, carnations, asparagus and rhubarb (the latter of which I added to today’s apple crumble – yum!): 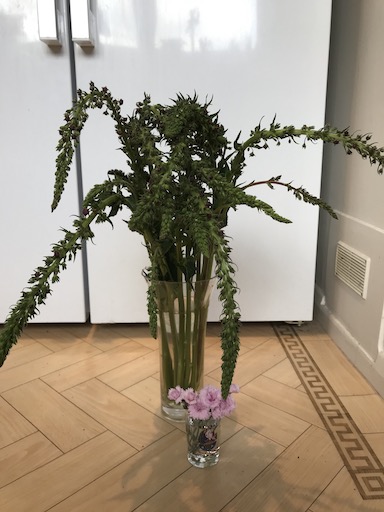 The verbascums do straighten out once they’re in water but look like a weird alien at the moment, LOL! 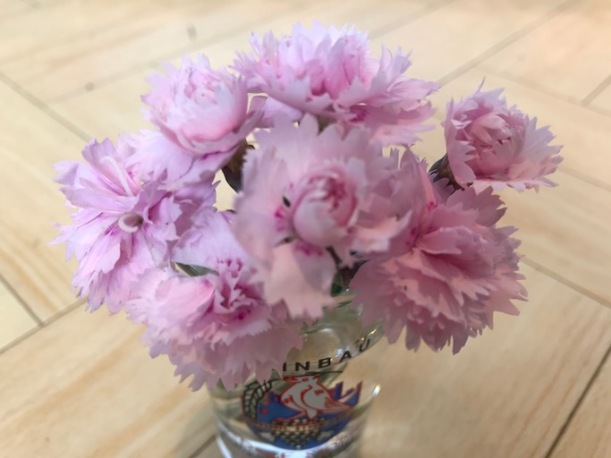 Have a lovely Bank Holiday and stay safe.

We used some of our home-made allotment compost today, and cut up a few old raspberry branches to add back into the mix. Also trimmed the edges of the plot, and planted a couple more rows of gladioli.

The lilies continue to grow well, but no buds yet! 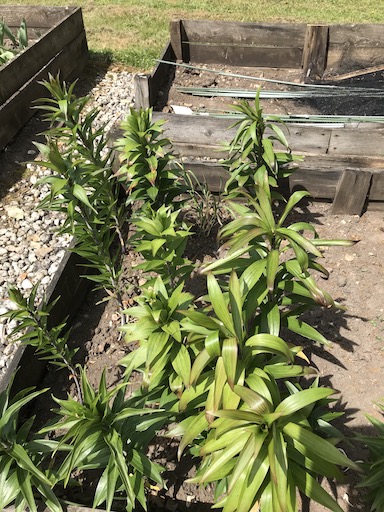 There was enough rhubarb to add to my apple crumble:

And, of course, asparagus for lunch – from the plot to the plate in just a few hours!

Here is the harvest of verbascum, rhubarb and asparagus:

Have a great Sunday, and stay safe, everyone!

I’m really not sure what is going on – we protect them against slugs and we certainly mulched before we planted – but the colour of these is totally different from the lovely lush green ones we have at home. It’s a mystery, hey ho …

In better news, however, more gladioli shoots are coming up and I planted two more rows today as well. 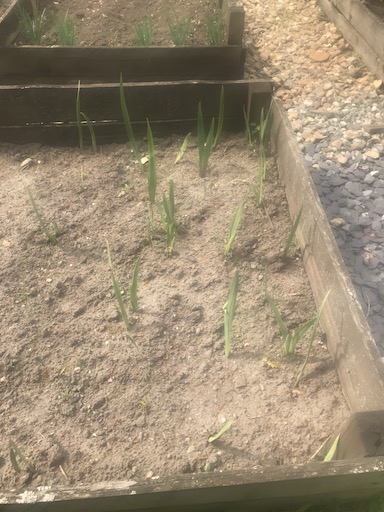 The lilies are also strutting their stuff: 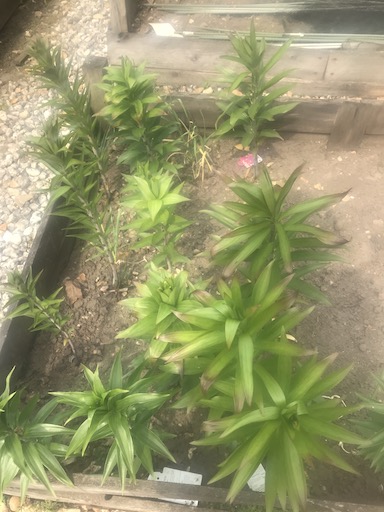 I’m also happy to say that the autumn raspberry bed is looking very good indeed (see below pic), so here’s hoping we get a good crop. (In other news, the gooseberry cage is doing a great job at keeping the birds away, so we actually still have gooseberries this week!). 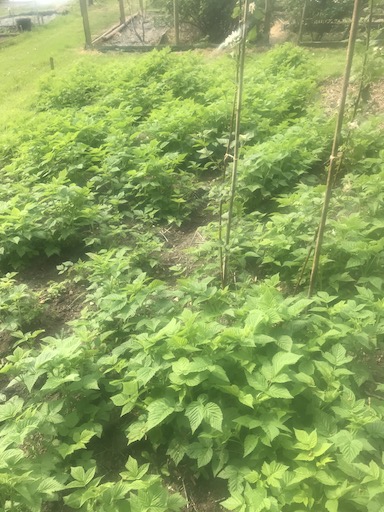 And there’s enough asparagus on the plot to last us several meals:

Today’s harvest is a couple of spare tulips, the first of the verbascum (hurrah!), two alliums, and the asparagus:

Here is the vase at home:

Goodness me, we have the first of our gooseberries forming already so, rather than lose them all this week as the birds get in there first, we have put the cage up – we hope it works! 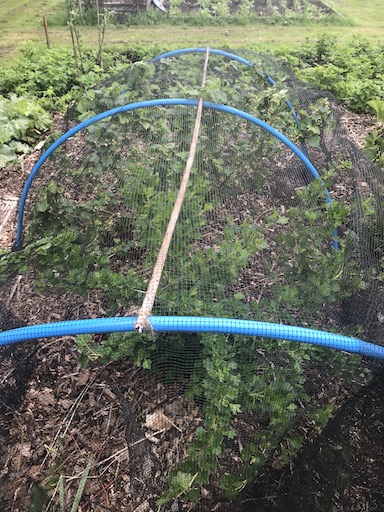 The rhubarb is doing okay, and there was enough to make rhubarb crumble for Sunday lunch, yum! 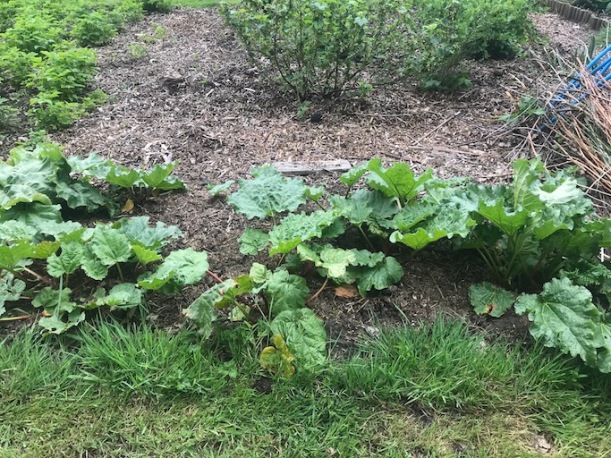 The gladioli are continuing to sprout:

And the lilies are getting larger. Plus we have one allium in bloom as well.

Whilst at the plot, we planted some rows of sunflower seeds and also a few rows of peas. We’ve protected the peas with plastic to deter the mice.

No flowers this week, but we have a harvest of asparagus and rhubarb: 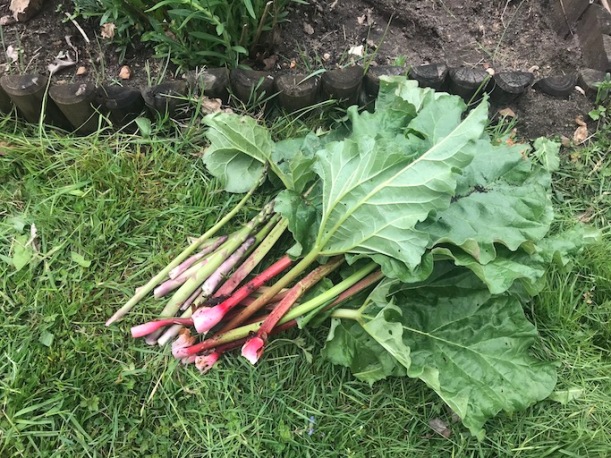 Have a good Sunday and stay safe.