Today, K took half a bed of daffodils out and we’ve planted beetroot in their place – striped ones which don’t stain red (hurrah!). We’re waiting for the golden beetroot (which also doesn’t stain) to arrive, but it’s not here yet. In another cleared bed, I’ve put the five yakons (Peruvian Ground Apple) we saved from last year, and also three courgettes which arrived as super-plug plants this morning. Yes, that’s only 8 plants in one large bed, but they’re enormous when they get going, and last year I had to move them twice to make space, so I don’t want to be caught out again.

Meanwhile, the asparagus have gone mad while we’ve been away on the Isle of Wight (a jolly nice holiday it was too!), and also the rhubarb has grown – enough for a rhubarb crumble for lunch tomorrow, I think.

In flower news, the alliums are now out and the lupins are doing very well, so have picked those today. Lupins do look a bit odd in the vase but I’ve done my best, LOL. I’ve also put slug-doom down on everything I can think of and bug-sprayed the lilies and the lupins so hopefully all manner of thing shall be well. 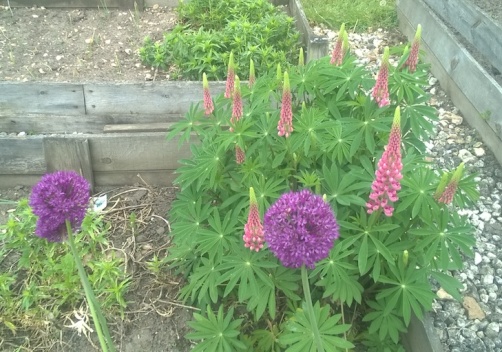 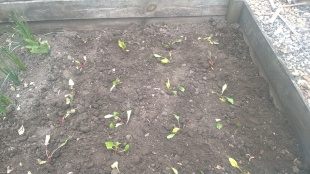