We’re nearly at the last of the early daffodils now, but they’ve been a lovely show. There was an early bee on one of them when I picked it, but I managed to persuade it to let go – eventually! I left one almost-open bud for it to feast on.

In other good news, there’s one tulip stem showing in our tulip bed, hurrah! So next week we’ll take the netting off as there’s no danger of squirrels stealing them now. Still a lot of moles around though – I kicked over loads of hills today …

Whilst there, I did a hoe round, and also had a good clear up of the first sprout bed, as K has now removed the netting from it. The sprouts have certainly done us proud. The rhubarb’s not quite there yet though, as you can see below – maybe next week, eh, LOL!

Today’s harvest is sprouts and those daffodils. We’ll use the sprouts tonight – or some of them anyway – as we have friends round for dinner. They can admire the daffodils too, I hope! 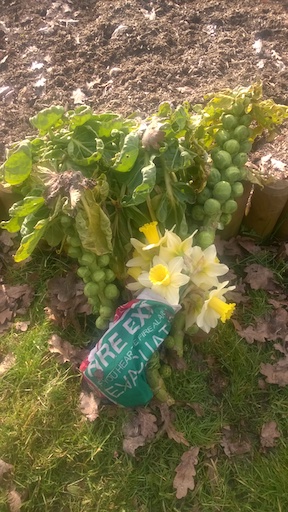 Here are the flowers at home – they’re so pretty, and I love them. Hope the next tranche turns up soon! 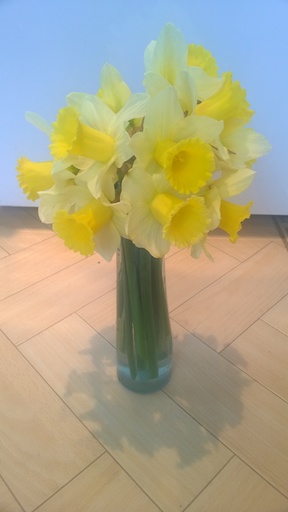 Have a fabulous weekend, everyone!