There are five days to go (not that we’re counting …) to the big Allotment Show which takes place this coming Friday, so the allotment folks are becoming quietly focused. Or it’s contained panic – but it comes to the same thing, LOL!

As a result, we haven’t taken any flowers for the house today – except for a few sweet peas – as I’m keen to put some flowers into the show so want to see how everything is doing Thursday night. However, I have cut down half of the gaura as they’re starting to be a bit of a nuisance even though the bees love them. They’re trailing through the dahlias so I can’t see what’s going on, and likewise on the other side with the chrysanthemums. NB: Sad to say the chrysanthemums are behind so there won’t be any from us at the show this year. Back to the gaura – I don’t think I’ll grow these again, as though they look nice in vases for about 1 or 2 days, they then kind of explode and the pesky petals and seeds get EVERYWHERE – I’m forever cleaning them up, so it’s really not worth it! I could replant them in the garden but we already have some and there isn’t really any room for more – so it’s the garden waste container for them, I’m afraid.

Flowers I do have my eye on for possible show entries are the sunflowers (which came Second in the blooms section last year – in case you’d forgotten!!), the echinacea, the dahlias, the gladioli (if there are any left by then!) and the marigolds: 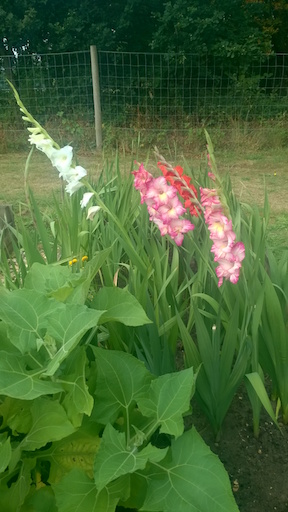 I will have to do something creative with oasis this year, as that’s what other people did last time – I was the only one who just plonked them in water, LOL! Shows what I know, eh – absolutely nothing!

Turning to veggie city, the courgettes have morphed into marrows again and are going full-tilt for world domination, go them:

However, they’re not as rampant as those runner beans – so if it comes to a dust-up between the marrow/courgettes and the beans, my money’s on the beans, every time … I only harvested a few runner beans today – enough for lunch and a couple of other meals this week for sure! – as we’re hoping to enter some of them in the veggie categories at the show, as well as the longest runner bean category.

K. has also dug up the potatoes, but sadly there are no super-large ones this year, probably due to blight, but we might see if we can find three roughly of the same shape and size for Friday. Oh, and the lettuce looks amazing – can’t wait to try some when the leaves are a bit larger! We also planted some new lettuce seeds and sweet william seeds in our spare bed to get another flower/salad crop going. It’s great to have new things at this time of year. 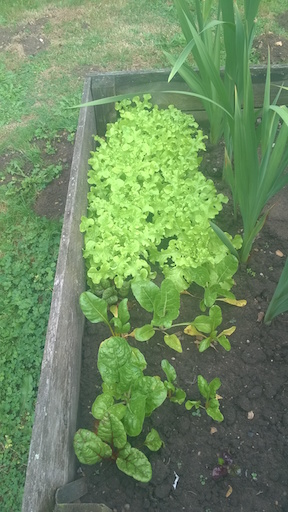 Anyway, here’s the harvest from today (not including the courgettes). I added the autumn raspberries to our apple crumble and very tasty they are too!

And here are some sweet peas (mostly the perennial ones from home, with some allotment ones – the last of the crop, alas!):

Have a super Sunday!