O me miserum, as they would say in Rome many years ago – our mangetouts and peas have succumbed to the dreaded mildew and we’ve taken them out:

Oh dear me. Not only that but my three lovely cosmos plants have died and there’s just no saving them – no idea why, sob! – so I’ve dug them up too …

However, it’s not all weeping and gnashing of teeth on the allotment front – the sunflowers are doing okay and getting taller by the second: 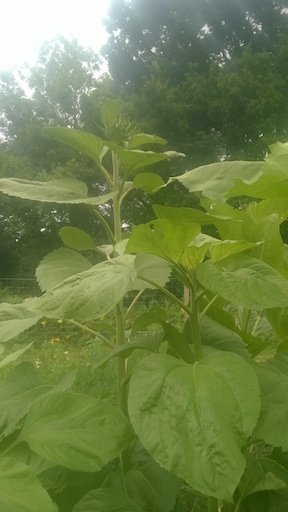 The sweet peas and dahlias are also going strong, and the dahlias are now all but free from the dreaded blackfly, hurrah:

Turning to the veggie mountain, the courgettes are growing apace and if you turn your back on them for more than a second, they become marrows, so we have to keep picking them. I do find courgettes funny as they’re ever so slightly prickly on the stems, leaves and even on the veg itself – not so much to be painful, but you’re aware of them when you’re scrabbling about for produce.

And I’m sure the lettuces are a tiny bit bigger this week though that might be just my wishful thinking, LOL!

Here are the two harvests of this week, which include beetroot, courgettes, mangetouts, peas, runner beans, blackcurrants (though not as many as last week as the birds have grabbed their share now), gladioli, dahlias, sweet peas, sweet williams, geums, echinacea and gaura. 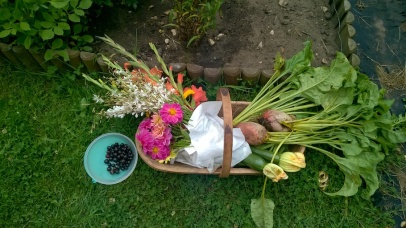 And here are the vases at home – I particularly love the structure of the gladioli – such a gorgeous plant! 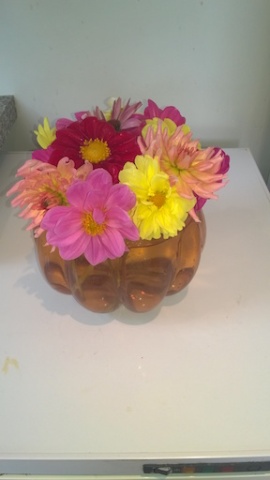 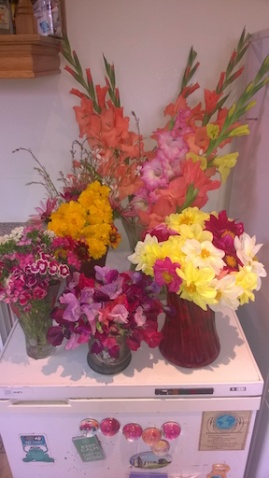