The moles are going mad at the allotment at the moment so I had to destroy a heck of a lot of hills!

Honestly, I’ve never seen so many – they must be having a party down there!

This week we’ve been planting more peas and netting them so they have something to grow up and we’re quite pleased with what we’ve managed to do:

There are flowers on some of the older peas, but no pods yet …

Here is the first of our week’s harvests, and also the end floral products (geums and sweet williams) in a vase: 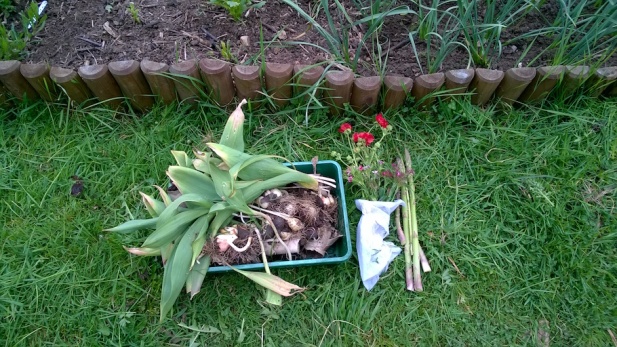 The ‘harvest’ includes a job-lot of tulip bulbs which I will plant in the garden at home later this year – so I can get new ones for the allotment, hurrah!

Today (Sunday) has been great fun with the Allotment Working Party and barbecue. Before we got started on the grand tidy-up, K and I planted sunflower seeds and also cosmos (as they make great cut flowers). 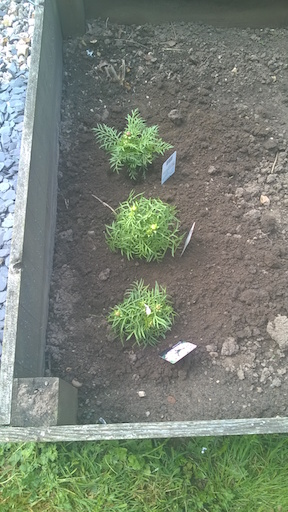 This time, I remembered the rhubarb – there was loads of it! – and it makes up most of the harvest, alongside more geums, spinach and asparagus. 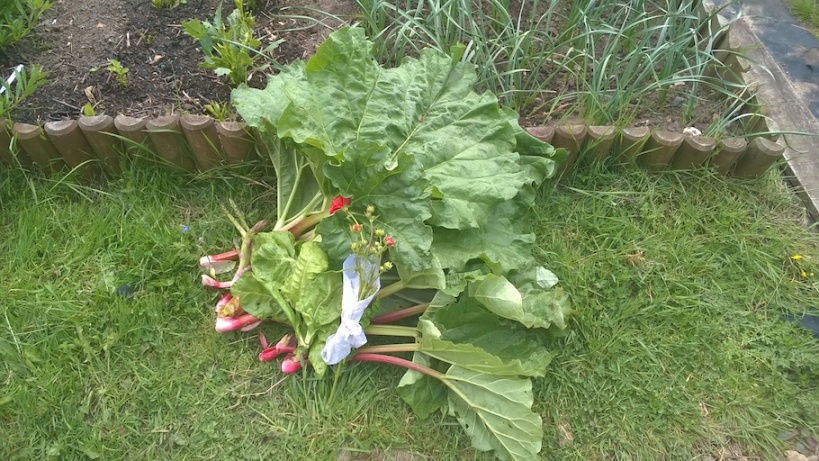 I’ve put all the rhubarb into a rhubarb and nectarine crumble, which we are very much looking forward to during the week!

However, the main thing about today was keeping the allotments tidy, so K and I went round the perimeter, together with numerous other folks doing a variety of key jobs, in order to tidy up the undergrowth. It seems to have grown loads this spring – due to the weather we’ve been having, I’m sure – and I had to get rid of a few slugs as I went round too!

Then of course was the BBQ – which was great fun, with wonderful burgers and scrummy cake. A fabulous time was had by all, and special thanks to Helen and Pauline for arranging  a brilliant day!

Have a great Sunday, everyone.