Back at the allotment today (we gave it a miss last weekend because of the weather), and I was initially rather worried about the state of our sprouts as a lot of them looked pale and rather ill (if sprouts can get ill). However, all is not lost as all it turned out to be was the outer skin drying off, but inside they’re absolutely fine. 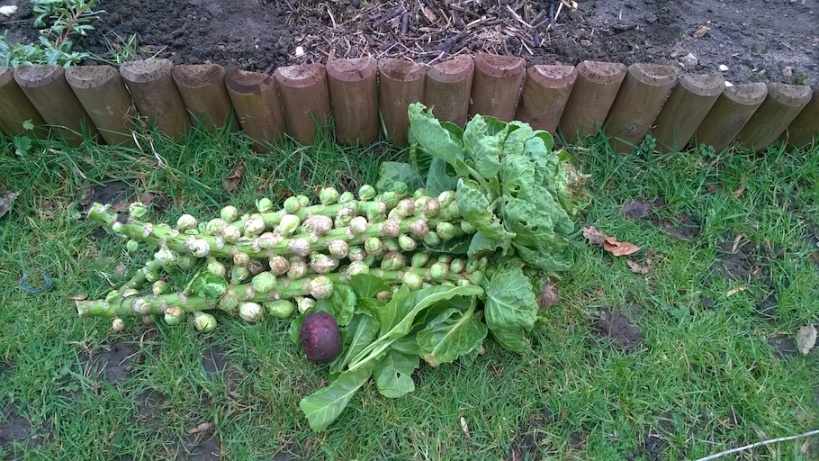 Here they are above with one lone beetroot and a handful of spinach. When I got home, it took me 50 minutes (gosh!) to peel, wash and prepare all of the sprouts from the three plants and we now have two bowlfuls of them. It’s interesting as last week we had a portion of shop-bought frozen sprouts with dinner, and honestly they were totally bland – I could hardly taste a thing. So the fresh and home-grown sprouts win hands down.

We also hoed round the allotment though there weren’t many weeds due to frost earlier in the week, and K put down a lot of chicken pellet manure across all the raised beds. We like to give everything a serious boost and it’s great stuff.

In the daffodil bed (well, one of them), the buds are so nearly there. I did think one or two might even be out as we had daffodils in bloom in the house last February, but our luck wasn’t quite in this week. There’s always next week though!

Meanwhile, the autumn raspberries have a few leaves on them. We’re leaving most of them unpruned this year, as per my stepfather’s method of cultivating them, and will see how they turn out. He swears by letting them grow on – which is of course utterly against Monty Don’s advice – so we’ll have to see who is right!

Have a lovely weekend, everyone.

(*Almost a Keats quote but not quite!…)