A lovely sunny day at the allotment this morning – though the wind was still very chilly. The daffodils are coming on, though they’re not quite in flower as yet – too exposed even in this sunshine. 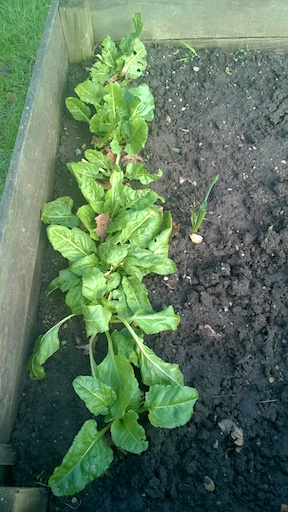 Oh well, that daffodil is going to be quite lonely, I think. Anyway, the tulips might just be a tad taller as well, though it’s very hard to say! Maybe they’ve even shrunk!…

Meanwhile, the autumn raspberries actually have leaves on them, which is a great deal earlier than when they started coming into leaf last year, from memory. Does that mean they might turn into summer raspberries? Who can tell …

The leeks are, as ever, their usual thin and elegant selves. Not sure how we can get our leeks to be bold and bulky, though I’m hoping these slimline ones will taste okay. They did last year, so there’s probably hope.

Naturally for this time of year, there’s nothing happening on the rhubarb patch, though the mulch from last week looks rather nice, to my mind, so I took a photo anyway. There’s one rhubarb leaf which is a good sign – though it may be left over from last year!

And our trusty harvest is as usual the sprouts. We’re getting to the less exciting plants now, with fewer produce, so have harvested two in order to make it worthwhile. The leaves are just too chewed for eating now, which is a shame.

Finally, a quick hoe round and we were done. There was a fair sprinkling of our fellow allotmenteers around today too, which was lovely – spring is definitely on the way!

Have a great Sunday.

One thought on “Daffodils and sprouts”