Ah now, this is what happens when I don’t go to the allotment for over a week because I’ve been sick – there’s a bumper crop! Thank goodness I’m well again, indeed. As you can see, everything is doing very well. We have cleome, dahlias, courgettes, coreopsis, echinacea, runner beans, sunflowers, sweet peas and a second flush of sweet williams, well gosh. 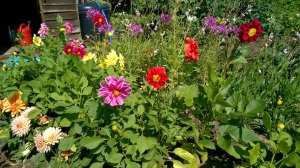 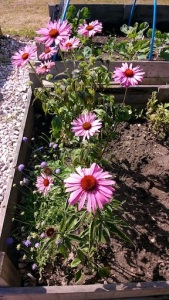 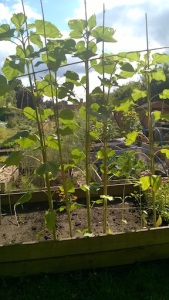 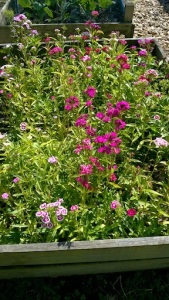 In fact the runner beans are getting too big and stringy, so I harvested the smaller ones and put the others in the compost pile. I really HATE beans with strings in them – yuck! It’s very hard to spot the darn things too as they hide themselves within the leaves very cunningly. Meanwhile, the sunflowers are getting very tall, and I had to tie them in to the stakes at the top. The flowers are forming nicely, but no colour yet.

We have also harvested the blackcurrant bushes, which was great fun (with the juice all over my hands I looked like I might have killed someone!) and left the netting off so the birds can have the ones we’ve left. All in all, we’ve harvested 1.5 kilos (gosh!). Tonight, K has strained the juices so we can save them, and will make ice cream later, hurrah. We’ve also made ourselves a special kir royale with a bottle of white wine we had in the fridge (as you do …) and very nice it was as well. Definitely summer drinking.

On the left of the trug above you can also see some of the young perpetual spinach which is still coming back in the brassica beds – so that’s salad sorted!

Anyway, as I’ve been absent for a bit, the flowers have built up and I’ve managed to make seven vases (seven!) of today’s harvest. If I had to pay for seven vases of flowers, it would cost a fortune, so hurrah for the allotment flowers.

And here’s the rest of our harvest, which includes potatoes, courgettes, onions and that lovely golden beetroot which is just fantastic – and so much easier to cook than the red beetroot: 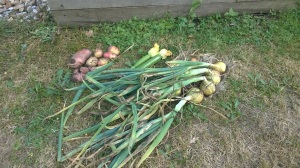 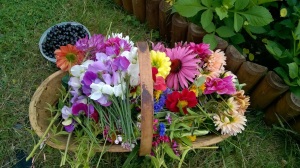 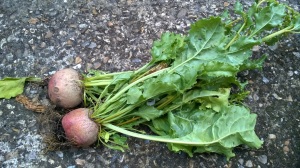 It’s great to be back at the allotment! Have a wonderful weekend, everyone.

4 thoughts on “A bumper crop of fruit and flowers”