We’re deep in compost-making this week, in those two new compost bins we now have. K has taken out the everlasting spinach and we’ve used this for compost, alongside lots of spare or dead raspberry canes which I have cut up into manageable pieces. Here’s the now empty bed (we plan to use it for Brussels sprouts, along with one of the other beds which currently has old tulips in it):

Spinach is a strange thing – the roots look like they’re weeds, to my mind:

And here’s our lovely compost bin. I suspect all this will be half the volume next week though as you can never fill up a compost bin, so they say!

Our asparagus bed is now enormous and looks like a fairy forest. It’s blocking one of the paths too, but that’s not really an issue – there are plenty of other ways round the plot.

In terms of flowers, we have a blue allium, and the sweet peas are starting to blossom too:

Back home, the supply of cut flowers, including lilies, sweet williams and the sweet peas continues apace: 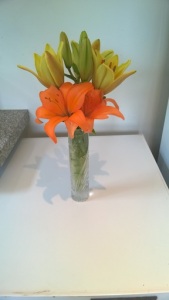 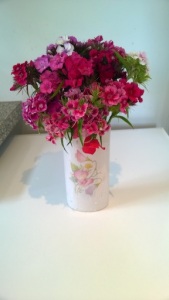 Finally, we’ve managed three different harvests this week, which is great news! The first is lilies, sweet williams, and foxgloves (which don’t really last that well in vases, so I’m not sure I’ll plant them next year …): 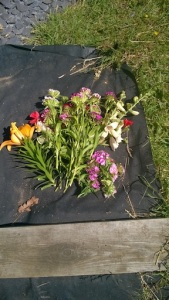 The second is rhubarb (for another crumble), beetroot, sweet williams, lilies and foxgloves:

And the third is sweet peas, sweet williams and lilies: 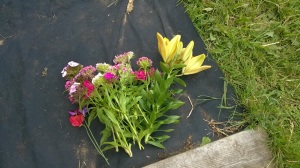 How I do love all these cut flowers – it really cheers the house up.

Happy Sunday to you all!