At the allotment today planting spring bulbs for cutting flowers next year. It just saves having to take them out of the garden where they look so pretty – so we’ve decided to give over a couple of allotment beds to the cut flowers concept. We’ve planted 40 daffodils in the begonia and verbena bed, and also another set of daffodils in a spare corner elsewhere, plus alliums and also some garlic cloves. Well, it keeps the evil nibblers at bay, so they tell us!

Also did a good weed and tidy up while we were there – as well as having the pleasure of finally actually meeting Jackie, the lady whose plot we’re taking over. It was great to chat and also to find out that she might be leaving some of her glorious soft fruit bushes when she goes at the end of the year, so that would be wonderful, as we’re very keen on the soft fruit possibilities.

Plus we’ve harvested leeks, beetroot, carrots and one pea pod(!), so that should keep us going for a few days, hurrah. Strangely, however, we have a few cauliflowers in the brassica bed, but they really shouldn’t be there till spring! Suspect we’ll have to take them out and throw them away as I don’t think they look too tasty … Finally, the nasturtiums are doing very well indeed, as you can see in the pics – and there’s yet another foxglove or two, and even a penstemon, which I’ve picked for the vase at home. 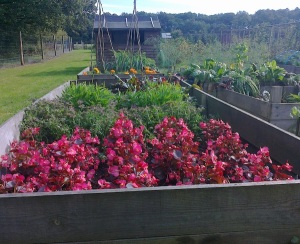